The approaching silhouette coming up the road, clad in what looked like motorcycle gear and a helmet dangling from his left hand is an image that i will never forget. There I was in Pang, the army camp outside a “parachute tent chai” shop, 200kms from Leh just after the expansive, beautiful, eerie “more plains” at 9am on Aug 5th 2010. The rush of joy, relief and happiness in seeing Joshua Crasto after a night of adventure was right out of a “h/bollywood movie”. Like the “just-about-to-lose-my-virginity” bollywood song we ended up looking deep into each others souls to try to figure out what happened the previous evening that lead to such a heart wrenching moment. If i may, wind up that kick-starter again…. 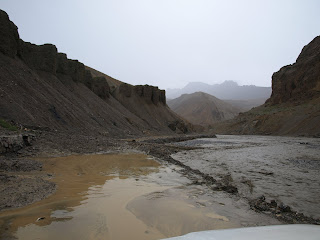 Aug 5th, 2am..Hotel Lharimo, Leh, I wake up Josh and have him look out the window to a mostly clear night with the odd shivering cloud lit by moonlight. Like soothsayers we both looked at each other and repeated “no bikes tomorrow morning”. A decision that I will never regret as long as I live, ride or die, a decision that came in through the morning mountain winds and settled itself like a heavy cloud on both our minds. 6am flag off on day 5 of our motorcycle tour wasn’t going as planned. Customers faces contorting into objections with speculation on this decision. 2 cars and 2 hours later, customers were on their way to Sarchu for the night. We left soon after, Josh on the Husky, me in the four wheeler with the luggage. A stop for maggi at Rumtse before the climb up to the second highest pass in the world and the driver walks around asking for a spanner (10mm btw). I go around and see brake fluid having a field day on the road. Brake line busted. Great! M-Seal Phataphat & local juggaad and we are on our way up Tanglang-la pass except the M-Seal has to dry for 30 mins. Perfect timing. I tell the driver to not touch the brakes until we get to the top and to use the gears for everything else, including braking. JCB’s, landslides and by 5pm we are in Pang. Maggi again, fuel in the Husky and I ask Josh to leave. The rain gods decide its time to show face: a drizzle & 5 clicks after pang, the river to the left and the mountain side to the right made for an interesting pause in the journey. Like a live animal unleashed, each channel in the mountain face, spewed what looked like the entrails of itself, rock, gravel, sand, soil and water, crumbling, crashing, rushing into the river and swallowing the road whole.  Bravado, carpe-diem, customers that we had to catch up to prompted some huffing and puffing between me and the driver. Having turned the car around, pummeling it through one such meandering mass of earth, promptly had the car sunk & stuck. An hour of digging, groveling, praying, placing rocks under the wheel using two car jacks to lift the four wheeler and blue fingers has us saying our last wishes. Turning the car around to head back to Pang seemed distant with the river crashing around us and the sound of tar drums floating down river and sounding the death knell. Time to walk to Pang, I tell myself. If i can only reach the army camp, I am sure I can sort this out. Wishful thinking. The treacherous 4kms that i navigated that night will be my achievement for life. Quicksand like a live animal oozing itself onto the road merging with the river,  sometimes knee deep not opening it jaws,  the river to one side and the crumbling crashing mountain side to the other (deja-vu). The light at the army camp was my beacon of hope for that night.  90 minutes later, kichdi, army hospitality and a heater went a long way in getting my senses back, while my thoughts were randomly wandering between Joshua and his whereabouts little aware of Josh’s night of madness.
The morning crept up ever so slowly, damp, cold and utter chaos. The road snaking down out of Pang looked like it had been bombed by rain and the army gypsy’s going back and forth only added to indian chaos.
The silhouette appeared and the bollywood song played!. Josh experiments with truth had led him hardly 5 clicks ahead of us the previous night and sinking his front 21 inch wheel into complete water left him shaken, not stirred. Having water unto your chest, rolling the bike back out of the water and thinking that heading head back down to meet “anand and the car” turned into his battle of “water”loo. 4 hairpins back tracked and heading into darkness with the everready-battery, headlight of the husky, saw him snaking back over the same sludge multiple times. Coming around another bend and the high beam of the husky caught the mound of black and that instant of realization that there was no road and his presence of mind on his right wrist saved him from the sheer vertical drop of 1500feet into freezing cold waters below. Josh must have said his prayers too, before singing that song “here i am stuck in the middle with you, jokers to the left of me, clowns to the right, here i am stuck in the middle with you”. Parking the bike by the side, and the memory of a truck parked somewhere between the water crossing and the washed out road had him find shared shelter for the night.
Our 10km walk back to get the abandoned bike, was worth a few pictures, but then where’s a camera when you need one. The 30 feet of washed out road, gravel, and the drop down to the river had us motivated enough to push, pull, shove and pretty much do anything to get the husky across and back to Pang. Whew!…Back to Leh that evening and the one thing i remember was looking past the clouds as we nearing Leh and wondering why the night sky was so ominous. The mid-night hour cometh. The morning panic knock on the door left us in disbelieve. Leh was cut off from the world and this time nature’s fury had shown no mercy. Lost trying to help, digging, knee deep sludge that moved when you stepped on it, bodies buried, families searching for loved ones and feeling the pangs of separation. 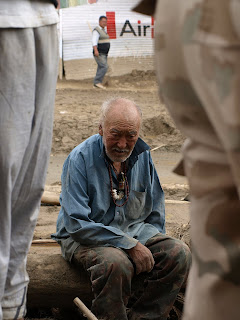