Organizing motorcycle road trips for friends always seems like such an easy thing to do, but doing the same with customers requires a completely different visor.  No amount of preparation, presentations, rider briefings and post ride photos do justice to the routes & the adventures of the unexpected.
Here’s a brief on our road trip, something that I hope captures the spirit and adventure of the world’s mightiest mountains.
Route map
http://maps.google.com/maps/ms?ie=UTF8&hl=en&msa=0&msid=117226074144870235278.00046bbba26d0b1b5d459&ll=32.170963,77.920532&spn=2.413056,5.614014&z=8
on this trip, burning serious gas were the following machines
5 ’09 Husqvarna 2009 SM610, 1 ’09 Husqvarna 2006 TE510, 1 ’08 KTM 990 adventure, 1 Royal 500, 1 Yamaha RX135, 1 Hero Honda Hunk.
The machines had all arrived as planned at The Peterhoff. Shimla (The Raid-De-Himalaya rally is flagged off from here every year) and so did our support crew of mechanics and backup vehicles. Things got busy right away with some last minute checks and top ups to the bikes. Our customers had all kitted up and stepped outdoors into the crisp morning air of Shimla and so did we. 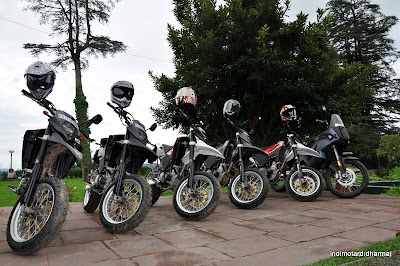 The plan: Shimla to for our night halt. Easy, great roads, it’s beautiful I tell my customers (little did I know what lay in store).  Deciding to take a slightly longer scenic route to avoid the chaos of typical Indian “hill stations” as they are called meant more kms, but lesser traffic and more twisties. Fun, I think to myself.
Reality: 9am, 174kms to go. Reality hits us as soon as we hit the twisties, smooth tarmac for sure, but slick rain washed mud on smooth tarmac doesn’t make for “safe”  riding. As we climbed towards Kufri (another “hill station” that’s been bastardized for tourism) rain, fog and broken tarmac made the going slow and painful and I could feel the group burning that thought on the back of my helmet. 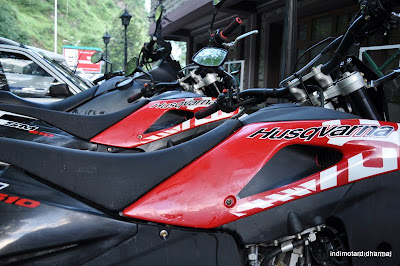 Soaked to the bones in spite of fancy gear , lunch at Narkhanda (thanks to HPTDC) at 4pm warmed our souls but still wet and cold we headed out, more rain, broken tarmac and another 80kms to go. I was beginning to wonder if this was a good idea at all.
Memory is a funny thing; the best ones that stick are the ones where you had roughest time.
6:30pm, bikes parked in front of the hotel, “chai” and comfy room’s ended day 1 with a relief for all.
Day 2 started on a better note with clear weather as we left and headed towards the Indian border in East Himachal with a planned night halt at with some stops on the way. 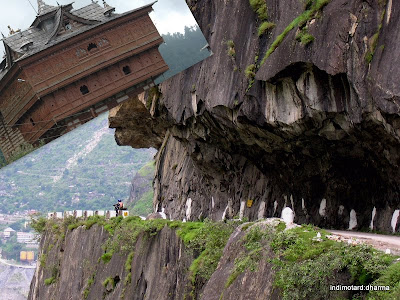 Our first stop was at the at Sarahan. Legends and myths surround this 800 year old temple. Stories of goddess and demons vanquished roamed the mountains. Its unique blend of Hindu and Buddhist architecture held our interest along with the cups of “chai” at the local shop. The sun and the ride helped us dry our boots as we twisted our way through roads that had been carved out of rocky mountain faces, meeting the thunderous Sutelj at one point and then riding along the mighty Sutlej, past the hydro projects that I am sure could be a project for Greenpeace activists. 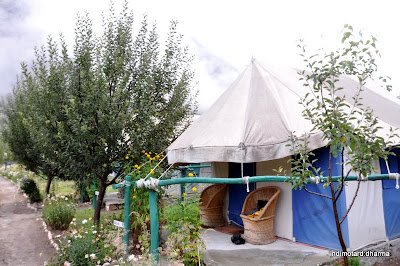 The ride for day 2 ended well at one of the most serene settings in the . Luxury Tents by the riverbed. Barbeque and campfire put us to rest under the stars. Altitude, 10000 ft. Temp: cold enough for drink. We head out the following day towards Chitkul the last village on the Indian border. Breathtaking views of mountains, steep ascents into nothingness, water falls cascading off the face of mountain slopes and the sight of the village met with some “ooohs” and “aaahs” from the group. Our ride for the day was short and once we met tarmac a fast breakaway group did some serious carving for the next 60 odd kms before we hit Rekong Peo and then to Kalpa.
Our stay at Kalpa was at the beautiful Kinnaur Kalpa run by HPTDC and the views were more than enough to quench the thirst of any traveler. Kinnaur is host to the shorter version of Shiva’s Kailash and all the rooms had views of the snow capped mountains and setting sun resting its shoulder on it. 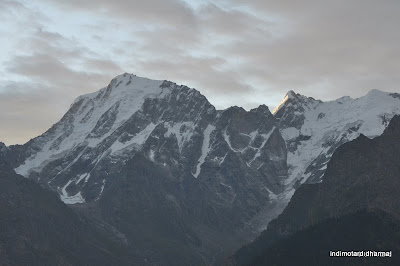 We had the evening to ourselves and the trip down to the village market held my interest from a historical sense. Old slate houses with wooden roofs piled with hemp stems, acting as insulation to keep the cold out, doorways that you would have to crouch into, a gushing stream of water right through the village gulley and the “chital”, a delicacy made from the local grain that is shaped like a diamond and only grows in this part of the world. All this and the views from the village made the evening a peaceful one and left me longing to stay on.
240kms to go to Kaza for the next three nights made for an early morning start. The long stretches of twisty tarmac, even more long stretches of gravel made the ride a mini paris-dakkar run with the big bikes and their riders testing their skills on these roads. The confluence of Spiti and rivers at Khab, one dirty white from the molten snow and the other brownish red from the silt made for a quick photo-op. Dust clouds of 8 other bikes in my rear view mirror, the Spiti river bed grazing my left boot, and the unending view of the snow capped Himalayan range made the journey an absolute thrill. 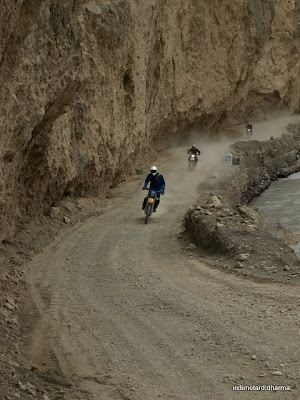 The winding ascent of roads led us to a quick stop at Nako Monastery and Tabo Monastery (both over a 1000 years old) and the final leg of the ride to Kaza was uneventfully magical.
Kaza at an elevation of 12,500feet is a small village-town that is cut off from the rest of the world for the better part of the year.  Landlocked by the Kunzum pass (4551mtrs) on side and long treacherous road to on the other side, Kaza has plenty to offer for the “soul”.  Villages, Century old Monasteries, the Spiti River dividing mountains and dwarfing them, the call of the wind and the glisten of the sun kissing the snow and ice.
The following two days were spent with day trips to Kee Monastery (precariously perched on top of washed out craggy, rocky mountain top), Kibber the highest road connected village in (14,500feet), Tashiganj for a sighting of the blue sheep and ending with a trip to Dhankar monastery.
No blue sheep, but spotting of Ibex and some video time for serious off-roading meant a good day for all of us. The support crew in the Scorpio with some members of the group opting to ride in it also meant they didn’t miss out on all of the sights. 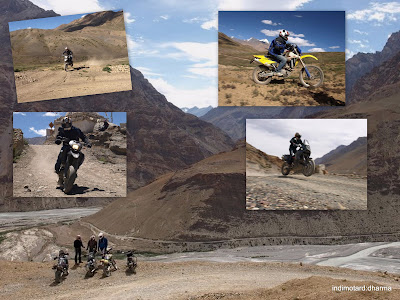 The toughest two days of riding were yet to come.
The ride to the sacred Chandertal (12000ft) lake from Kaza through the treacherous Kunzum Pass, part tarmac and part pure gravel was ahead of us and I knew that in spite of all the briefing the ride wasn’t an easy one.  Roads were non existent and the last 13kms to Chandertal was tough to say the least. Rough sharp jagged edges of rock, fine silt & river crossings left everyone bushed. To top it all the access to the lake itself had been cut off for environment reasons (I agree with this, though) and we trudged, luggage and all to the campsite by the lake. The setting sun, biting cold meant more “chai” and some grumpy times followed by a cheerful session inside the warm kitchen tent of Banjara Camps. The freezing cold night under the stars was probably enjoyed by only some. The next morning off again through Batal, and Gramphoo was pure torture. 90kms of gravel on a river bed isn’t exactly every riders dream. Having done this stretch at the pace of a rally, I had not realized how bad the roads were and the slower pace contributed to the pain followed by “when is this going to end?” The night halt at Bamboo Huts at Tandi was a welcome change for the whole group. We still had 365kms to Leh to go and our next stop was Sarchu for the night. Good roads, “chai” stops and photo-ops at Suraj-Tal, Nakeela pass and Barlachla (16500feet) made for an excellent ride. Tents, chai, dinner and the cold put everyone at rest. 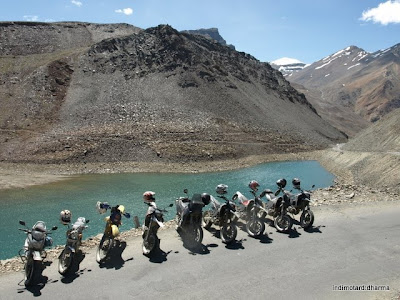 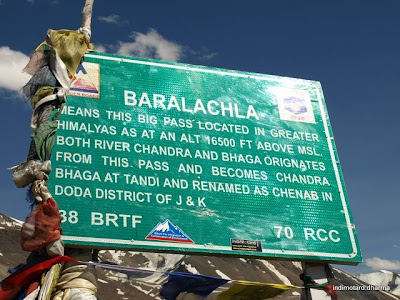 Our last leg of the journey from Sarchu to Leh was awaited by all. But what started off an easy ride turned into a tough one. “More plains” with its vastness captured everyone’s imagination and the ride through Tang-lang-la was probably the most brutal, given the state of the roads and the urgency to cross the pass without running into trouble or rough weather. 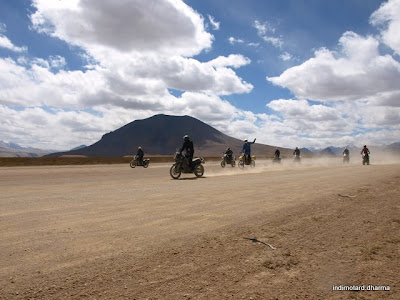 The torturous climb to the second highest pass in the world at 17500ft  was grueling on the body in spite of the upside down forks and long travel suspension and the ride down was through series of bends that were slick with fine silt. Apart from a flat tire on one of the bikes we reached without any major mishaps and the whole group was relieved as we hit tarmac at Upse and even more relieved when the eyes met civilization at Leh. The ceremonial ride to Khardung-la top (18380feet) and photo-op was a short and memorable one.

Leh was a cause for celebration for all and as the group departed in the next few days some of us stayed back to enjoy the sights and sounds of Leh. The icing on the cake was the four day music festival (Confluence 09) on the banks of the attended by some of the remaining pack.
Even though the majority of the line-up didn’t show up, we still had our hippie wood-stock moment under the sun, moon and the stars.
We wrapped up and I found my way to after almost a month and that’s when it hit me – Low Altitude Sickness.

indimotard.com
“we get your road trip”