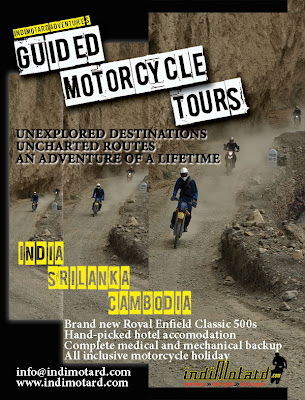 Two Exotic Motorcycle Tours in the Himalayas for 2011

Twister Pass
The mighty Himalayan range begins all the way from Kinnaur in Himachal when you descend into the Spiti valley, a barren desert land with some of the oldest monasteries know to civilization adding colour to the stark landscape. Whether it’s a visit to the austere Kye monastery, spotting ibex and blue sheep at Kibber or just the fact that you are under constant surveillance from the Chinese, being a few clicks away from the border: We promise you that the enchanting Spiti valley is a quick detour that will etch your journey to the World’s Highest Motorable road, deep in your mind and churn up stories to pass down the generations.


Paradise Isle
So you’ve heard about the notorious 16000 ft and Baralach La and the never ending climb above the clouds at Tanglang La, Leh being the oasis before you reach the top of the world at Khardung La, right? Ever wondered what’s on the other side? This year let indiMotard take you to the top of the world and beyond. Into the mystic, where the clouds part ways and streaks of sunlight light up a place that one can only describe as paradise. Deserts, rivers meandering through lush green orchards and snow capped peaks that once were passing scenery along the great silk route become our riding grounds. Join us on the other side, it’s called Nubra Valley.